Aloha everyone! For today's post I will be doing a design on one of my favorite Disney movies Lilo and Stitch. This movie has been out for quite a while, (since 2002) but it has been one of my favorites since it came out. I really like the story line, it teaches you the importance of family, and that even if your family is small and broken, it can still be good.
Now while I've enjoyed all of the characters from the movie their is one characters that I feel is the most relate-able and stands out the most would be Lilo. I like her quirky personality and that she shows that their is nothing wrong with being different.

Today's design will be based on the outfits that Lilo wears throughout the movie. 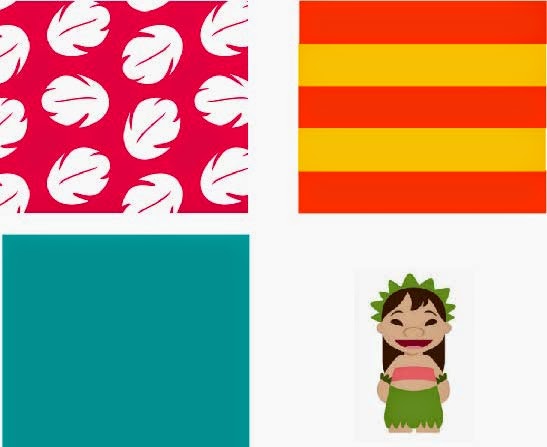 - The red Hawaiian dress with leaves printed on it that she wears the most (this will  go on the thumb and pinky nail.)
- The orange and yellow stripped bathing suit (on the index finger nail.)
- Her teal/ turquoises pajamas(on the middle finger nail.)
- Lilo's hula dress (goes on the ringer finger nail.)
(* As always this can be changed around for a different look, this is just what I did.)

As usual here are the polishes and tools I used to create this design: 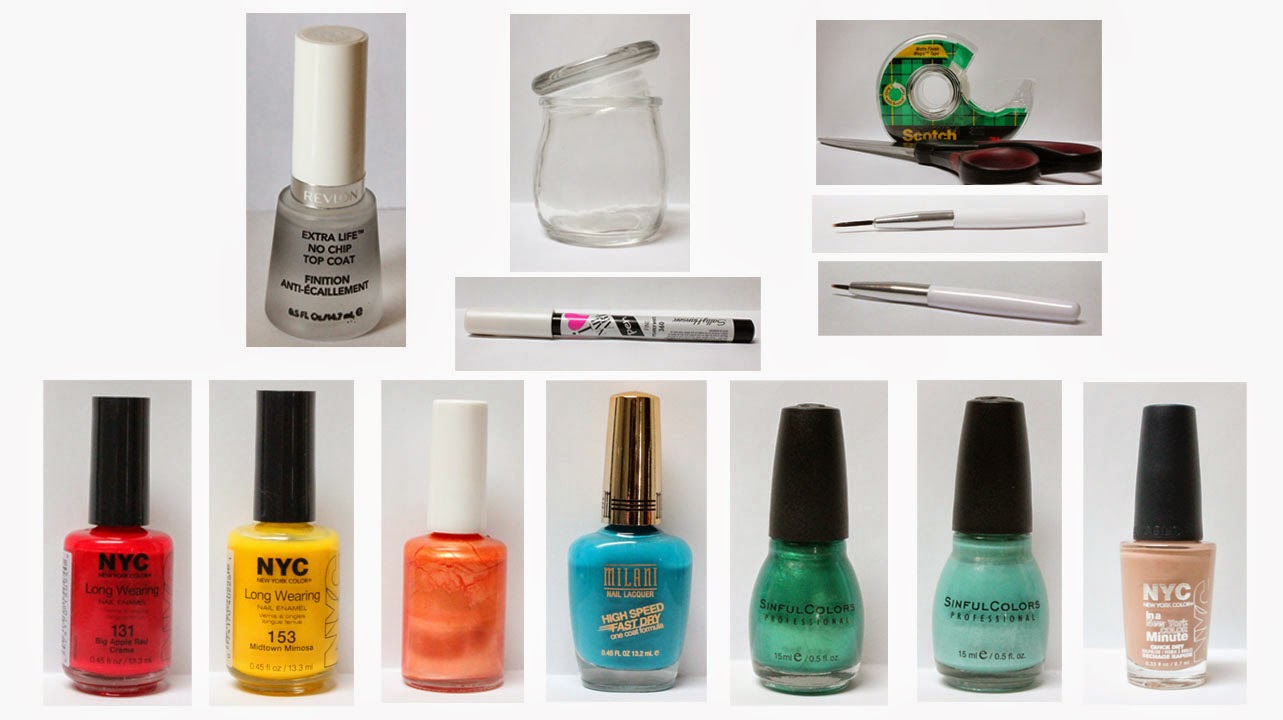 Nail tools: Glass jar for nail polish remover, used to clean brushes for nail art (found that it is better to us a glass jar not plastic, the polish remover will make the plastic melt), tape and scissors, small nail art brush, nail stripper brush.


From here on out I decided that I will be adding a level of difficulty before I start the tutorial. From beginner (2 polishes), Intermediate (4 polishes), and Advanced (5 polishes). This will be based on if I think a design I have done is easy for someone to do, somewhat hard/ intermediate and a design that would be hard to do/ advanced.

Advanced
Due to all the steps in this Lilo design and the difficulty of the red Hawaiian dress and the hula dress, I gave it an advanced rating. 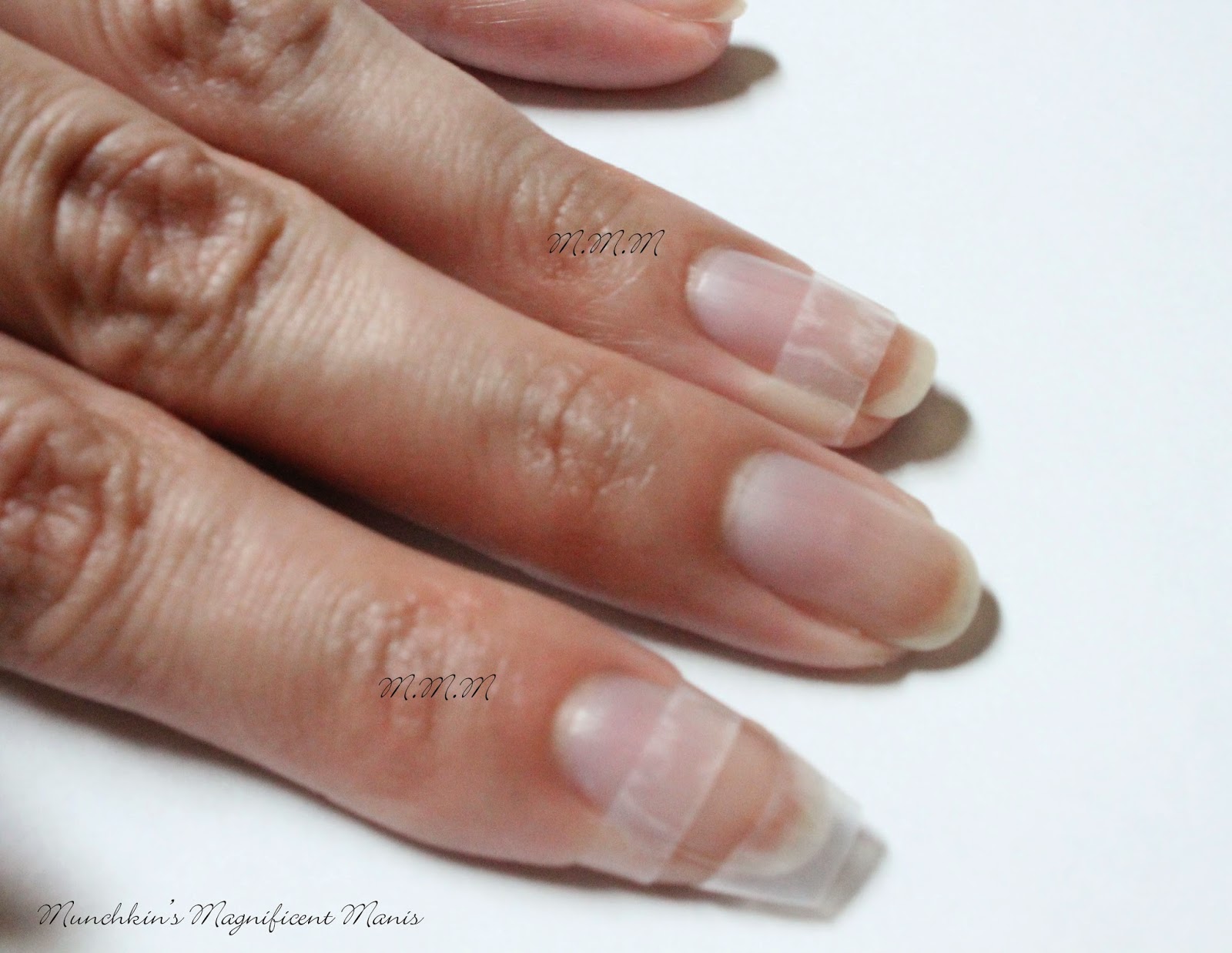 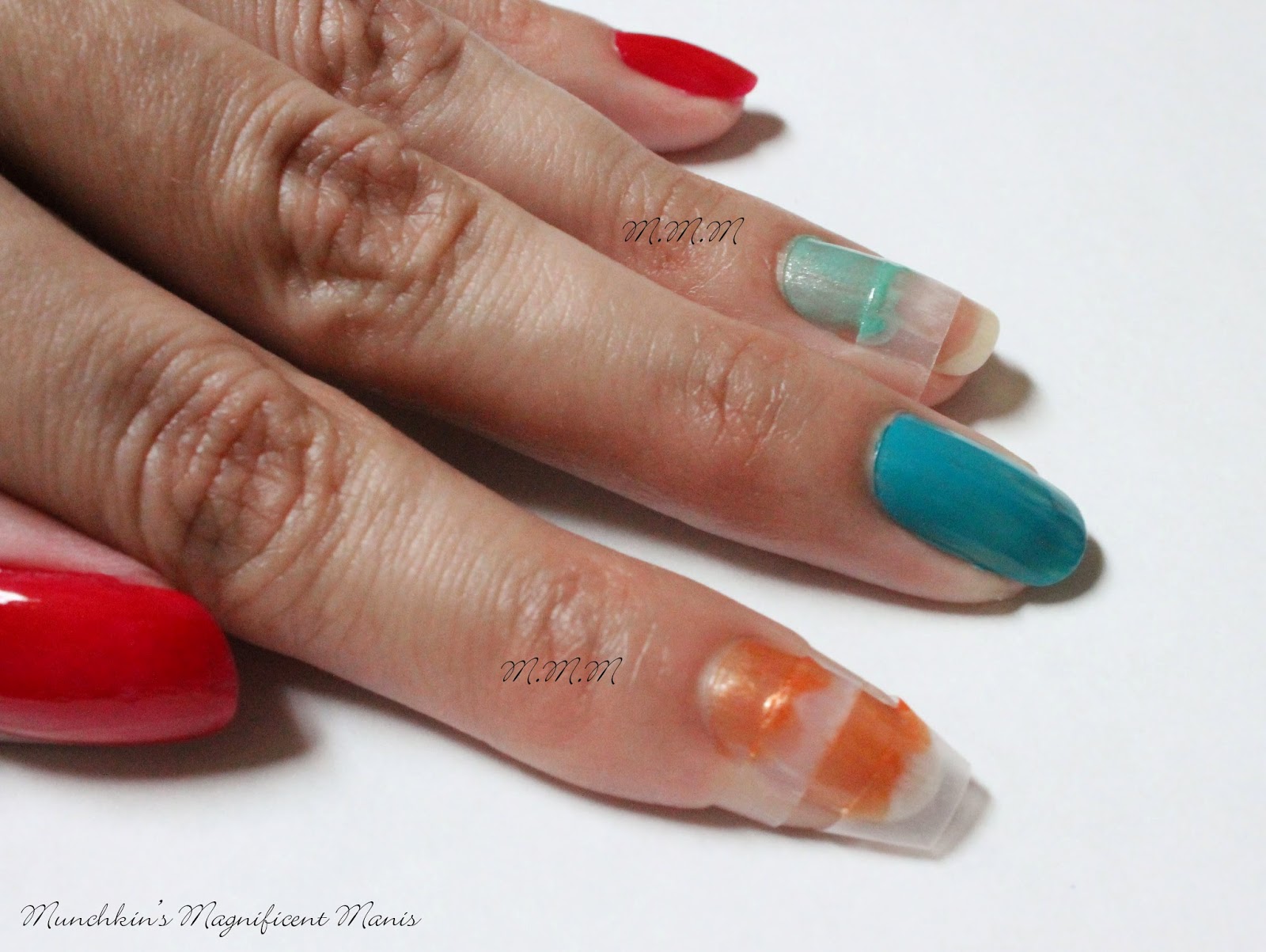 2. Paint your thumb and pinky finger with 2 coats of red for Lilo's red dress, the middle finger will just be a solid teal for Lilo's Pj's, on the index finger paint the parts that are not covered by tape with 2 coats of orange (it's okay if you get polish on the tape.)
Also ignore the light green on the ringer finger (do not paint it this way, just leave it blank for now) I end up not liking it this way. 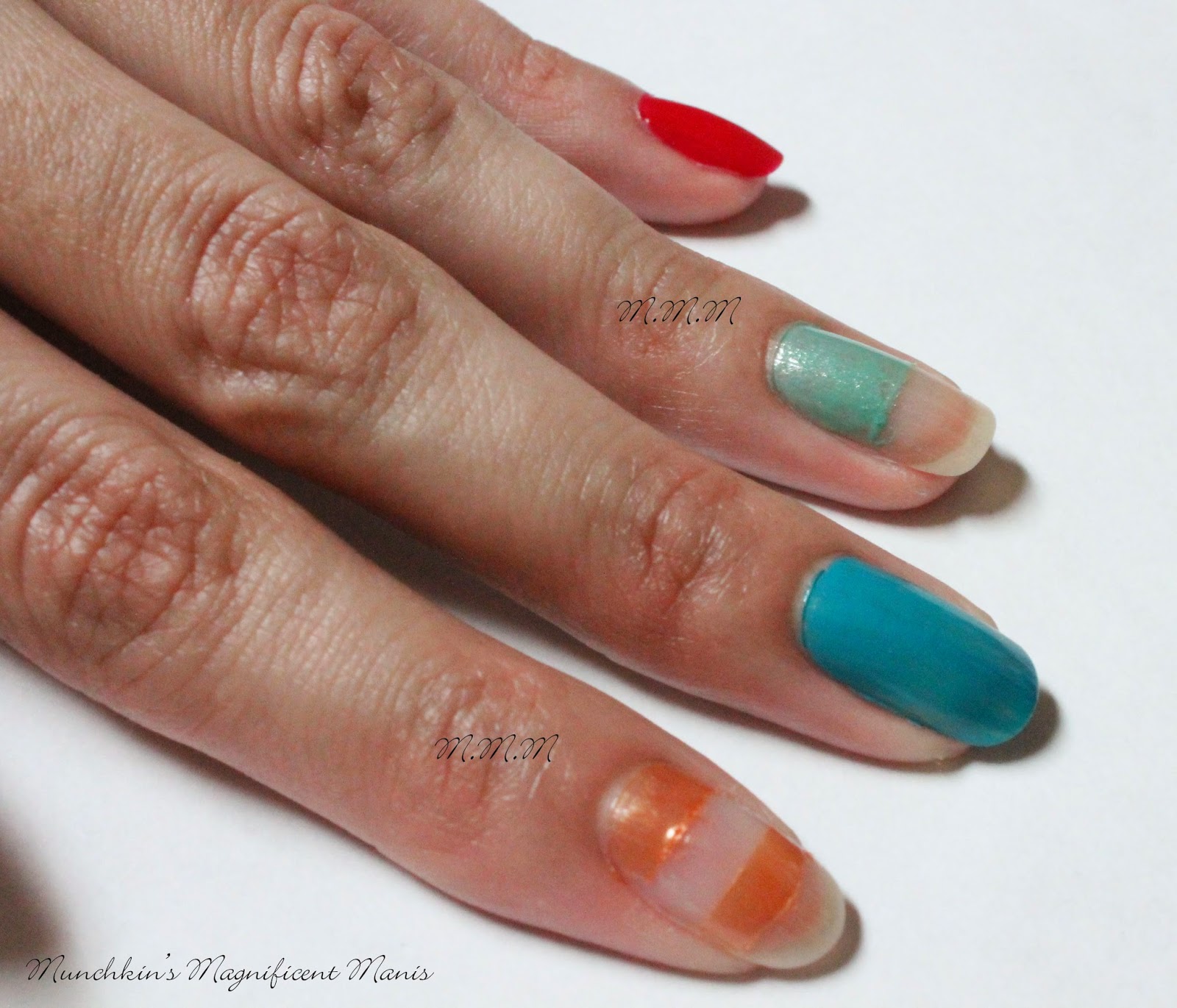 3. Take the tape off the index finger. As stated in the last step do not paint the bottom part of the ringer finger light green, leaves this blank for now and leave the tape on. 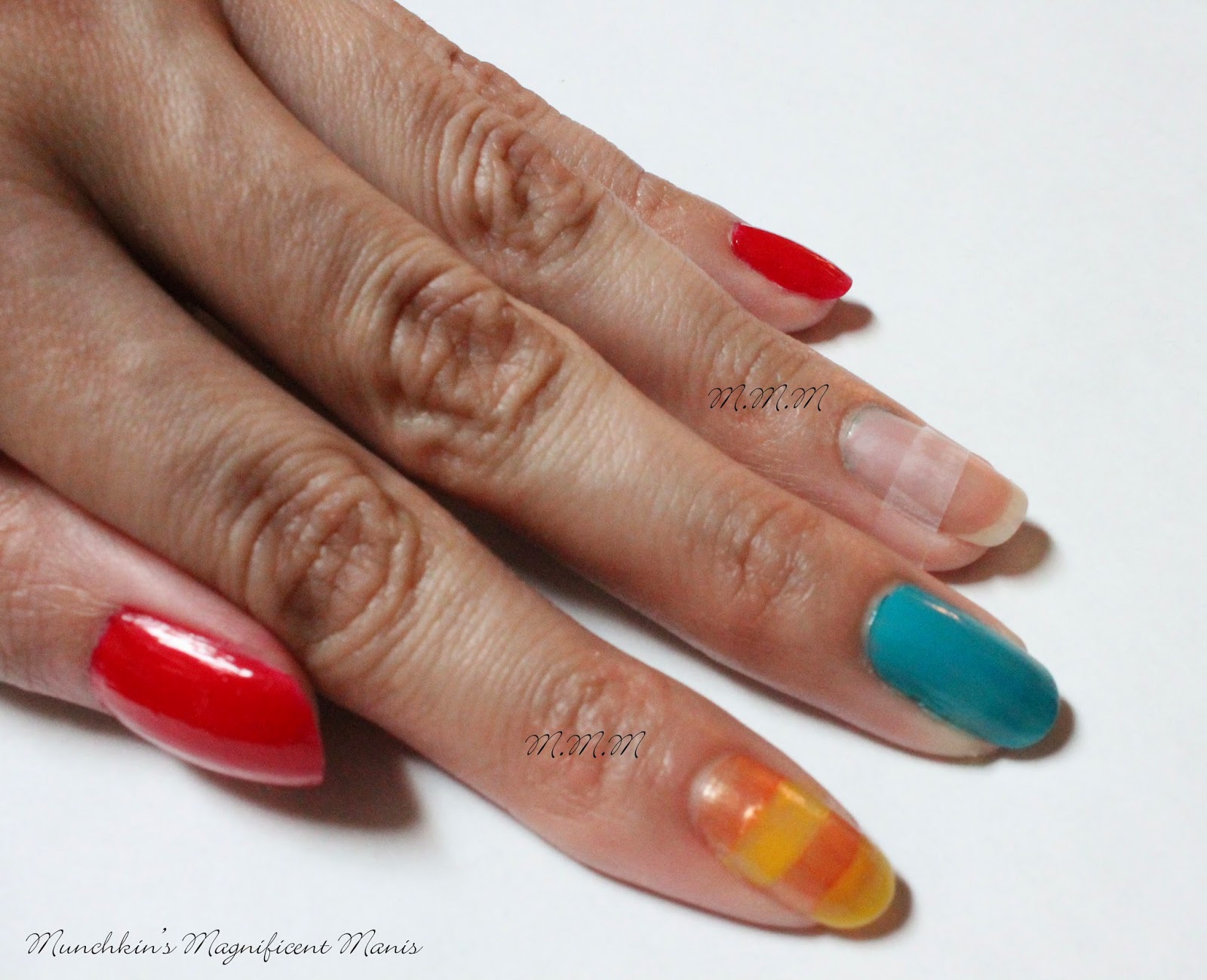 4. On the index finger paint the part that had tape on it with 3 coats of yellow, you now have Lilo's bathing suit. 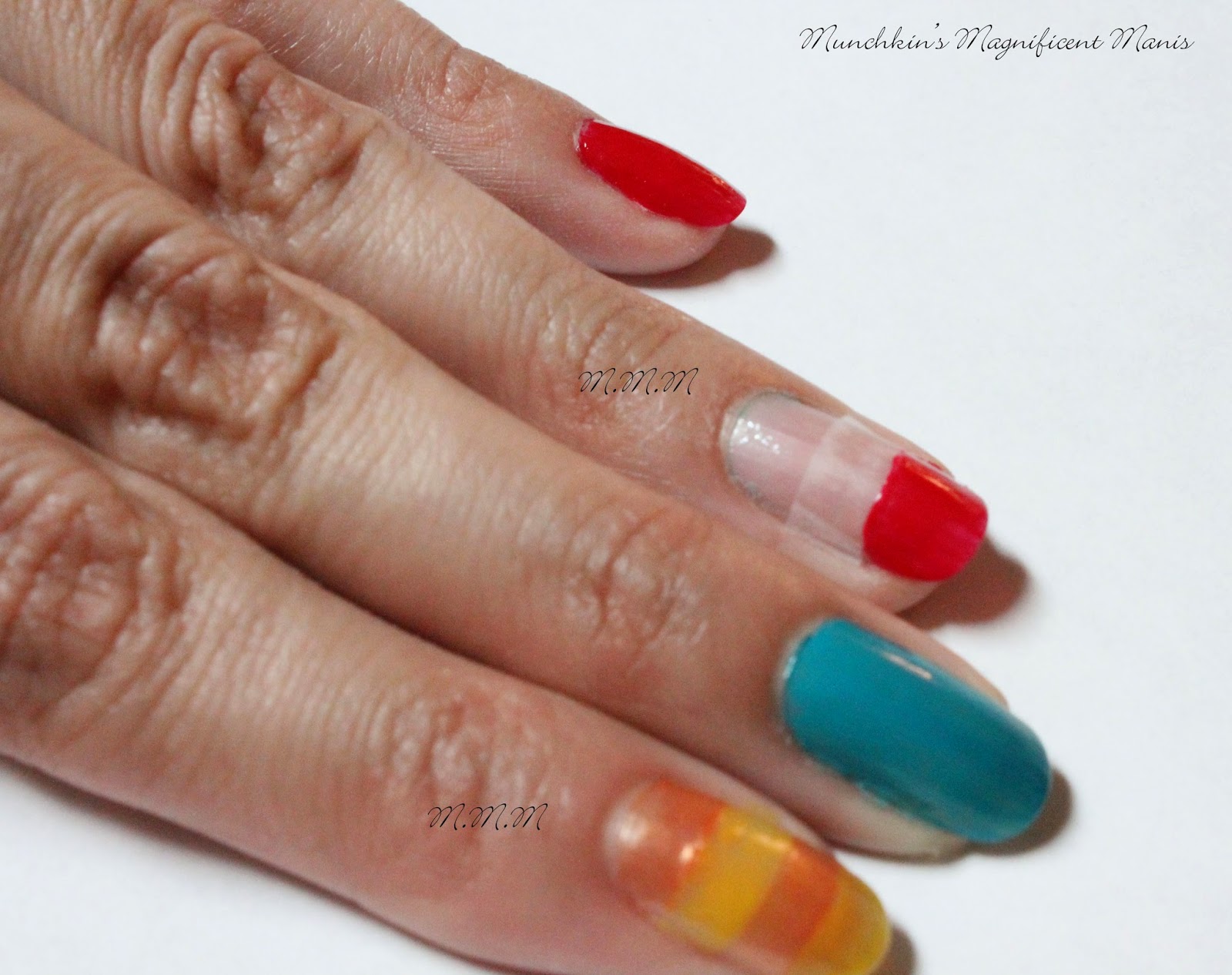 5. Now we will start Lilo's hula dress. Paint the upper part of the nail with 1 coat of red for her top. 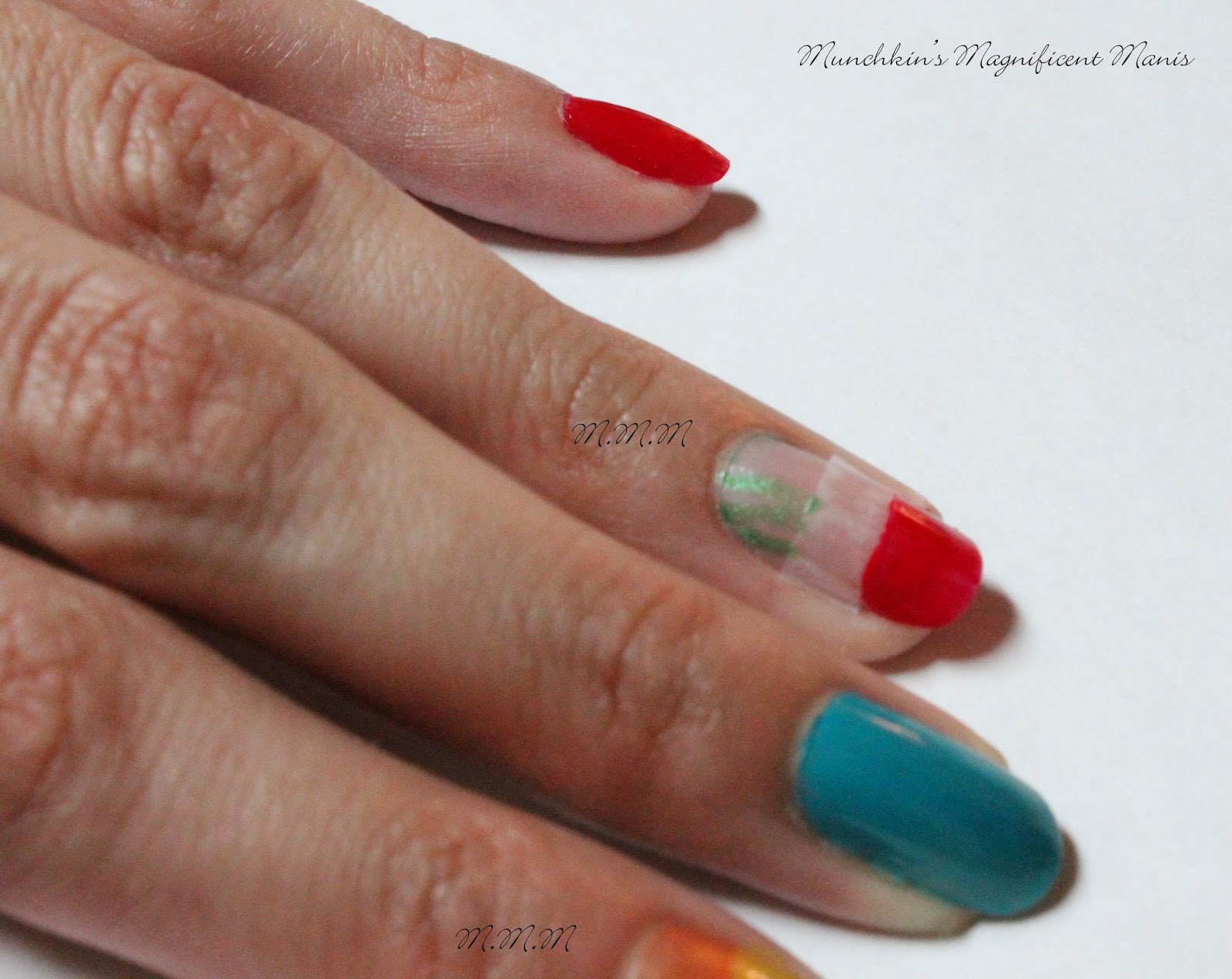 6. With the nail stripper brush and dark green polish, begin to paint under the tape small lines to look like a grass skirt. (I went over the lines 2 times to be opaque enough) 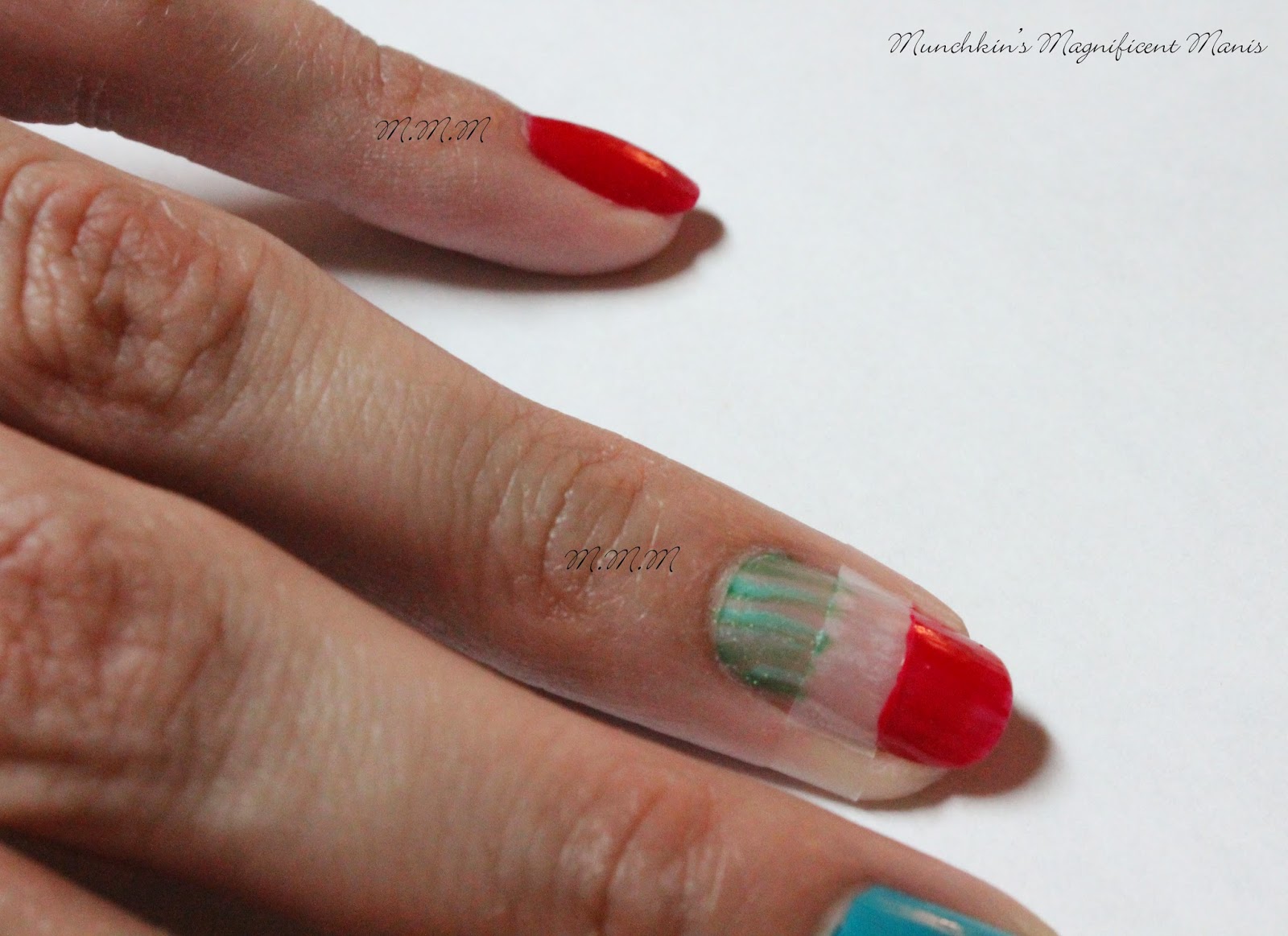 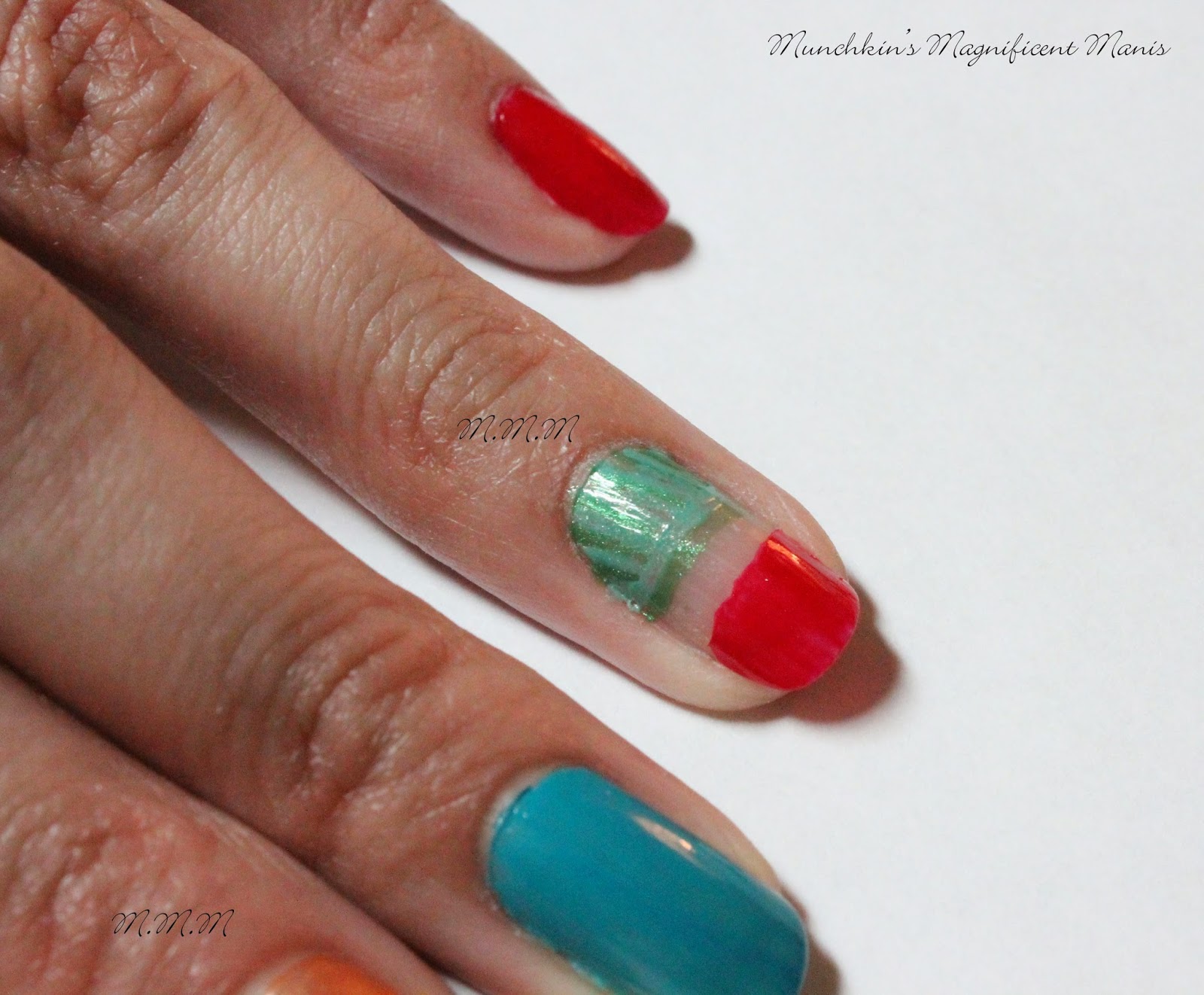 8. Now take the tape off the middle. Next add two lines (by slowly rotate your finger) above the grass skirt with the light and dark green polish. 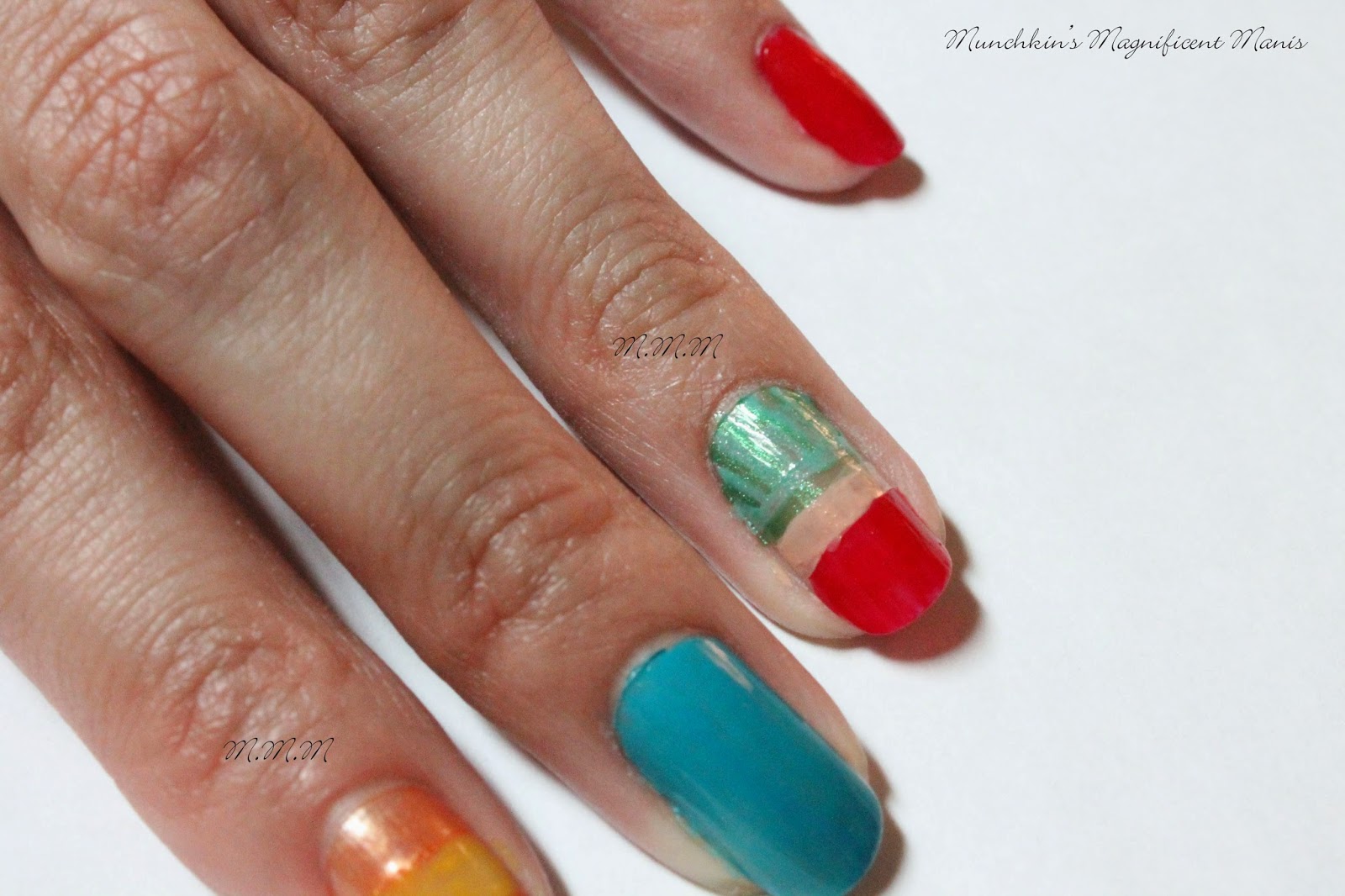 9. Where the tape was paint that with 2 coats of tan polish for Lilo's belly. 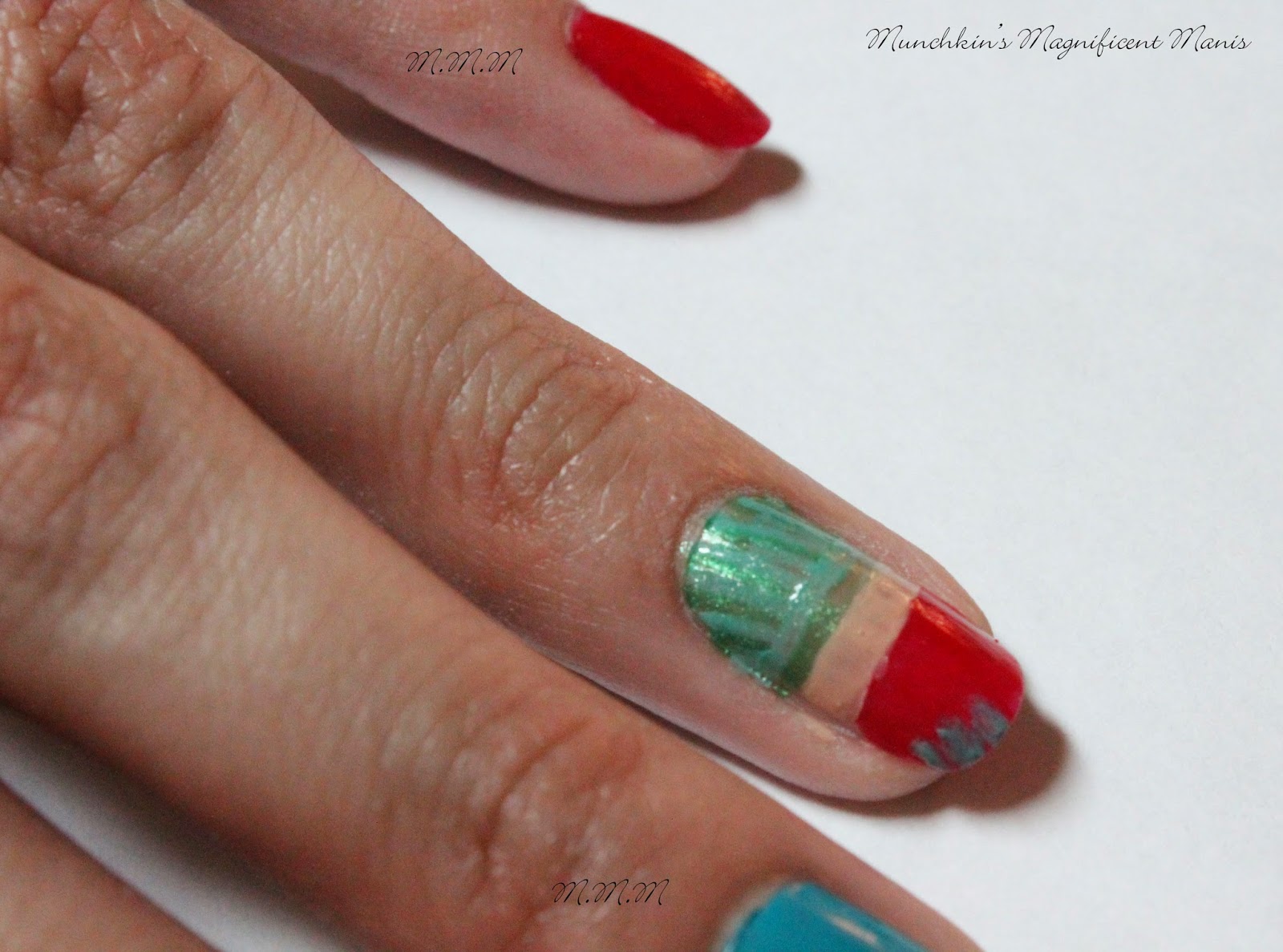 10.  For Lilo's head piece take the small nail art brush with the light green polish and start to make lines that look like small leafs. ( I went over the leafs 2 times) 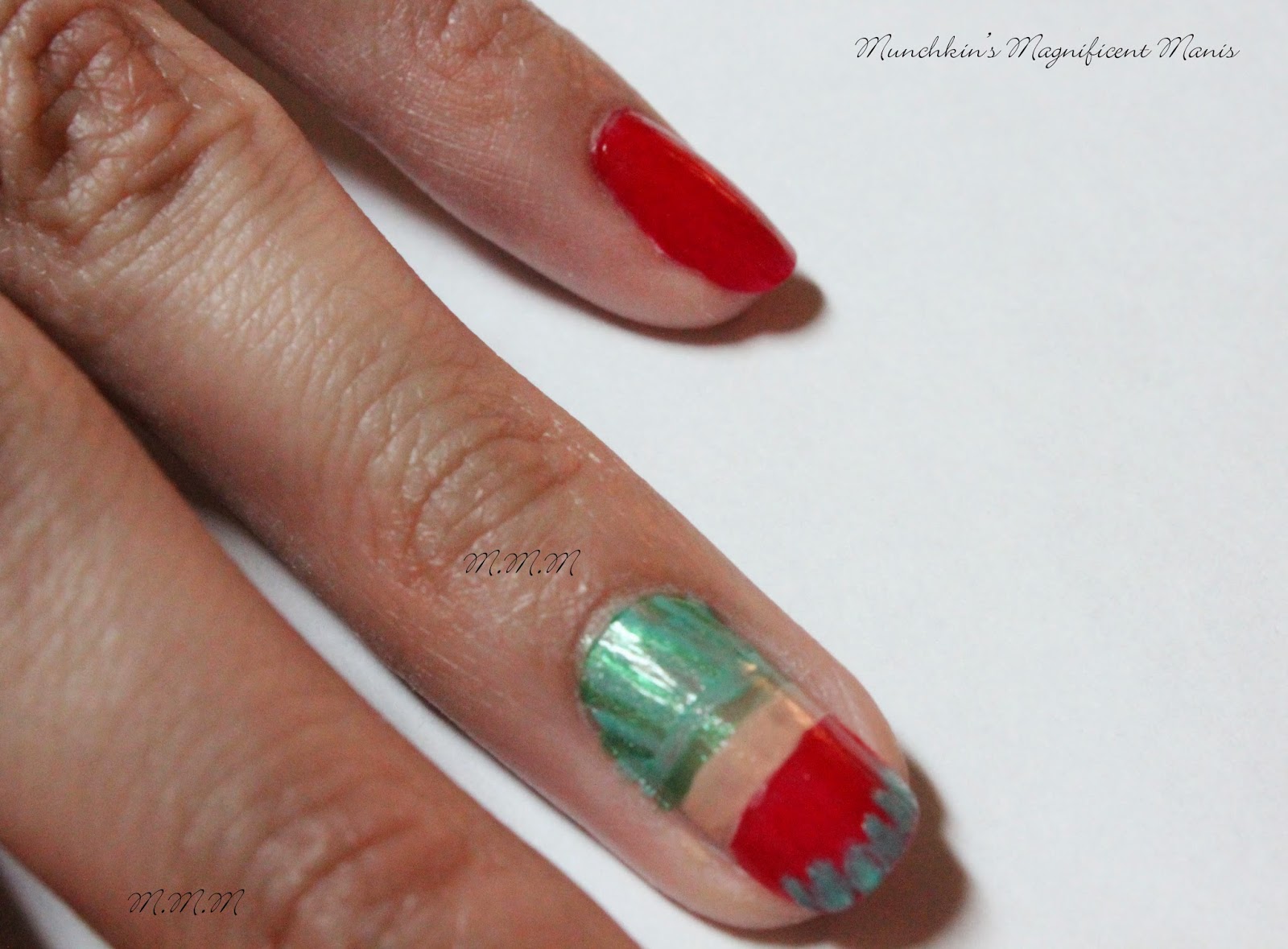 Do this all the way around the nail. Now you have Lilo's hula dress. 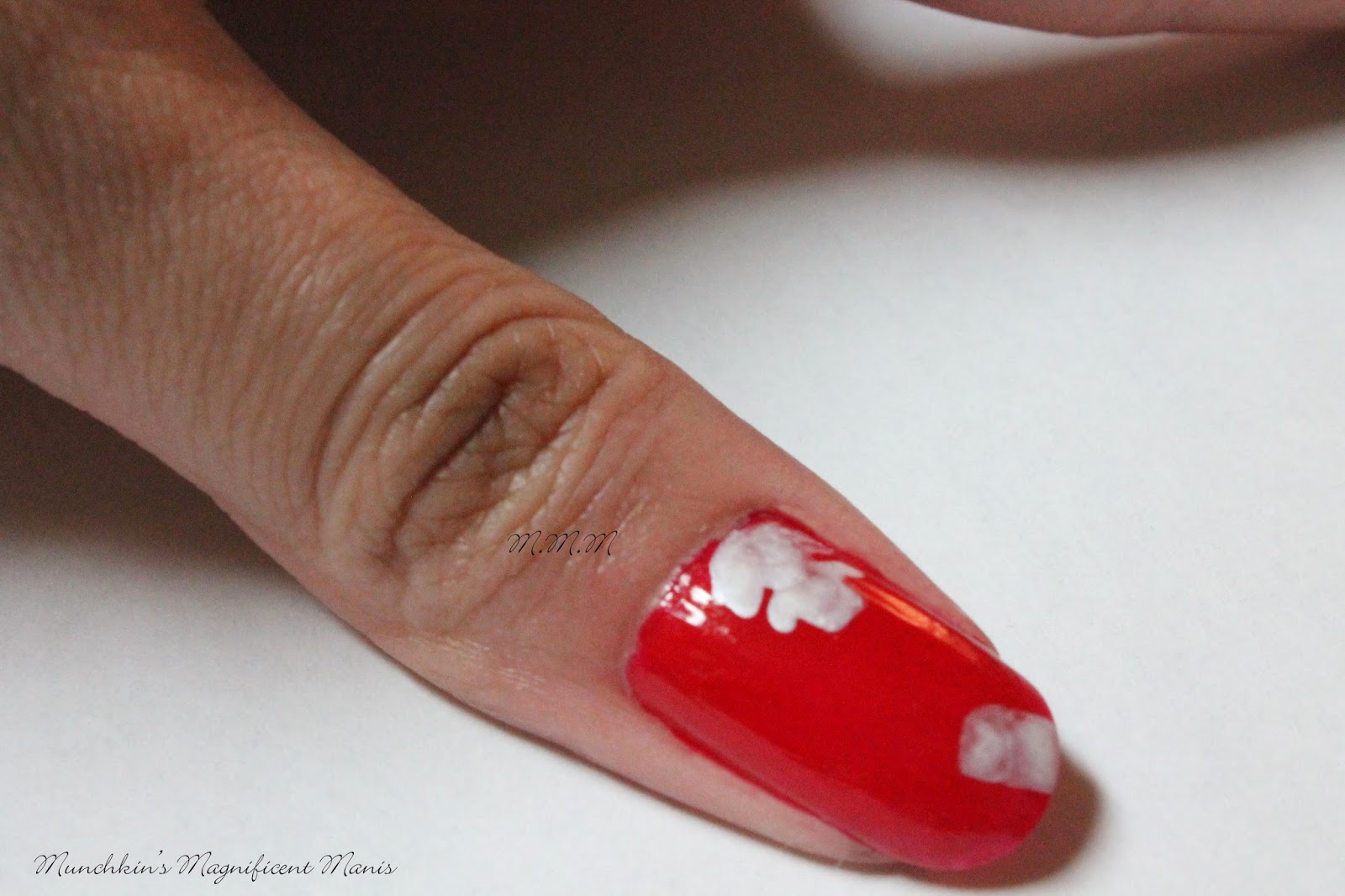 11. We are almost done. For the final design on the thumb and index finger, we will be creating Lilo's Hawaiian dress that she wore the most. Take the white nail art pen and draw a rectangle, it can be rounded at the top like I did, or have a point. (I found it a lot easier to use the nail art pen to draw the leafs then using a nail art brush.) 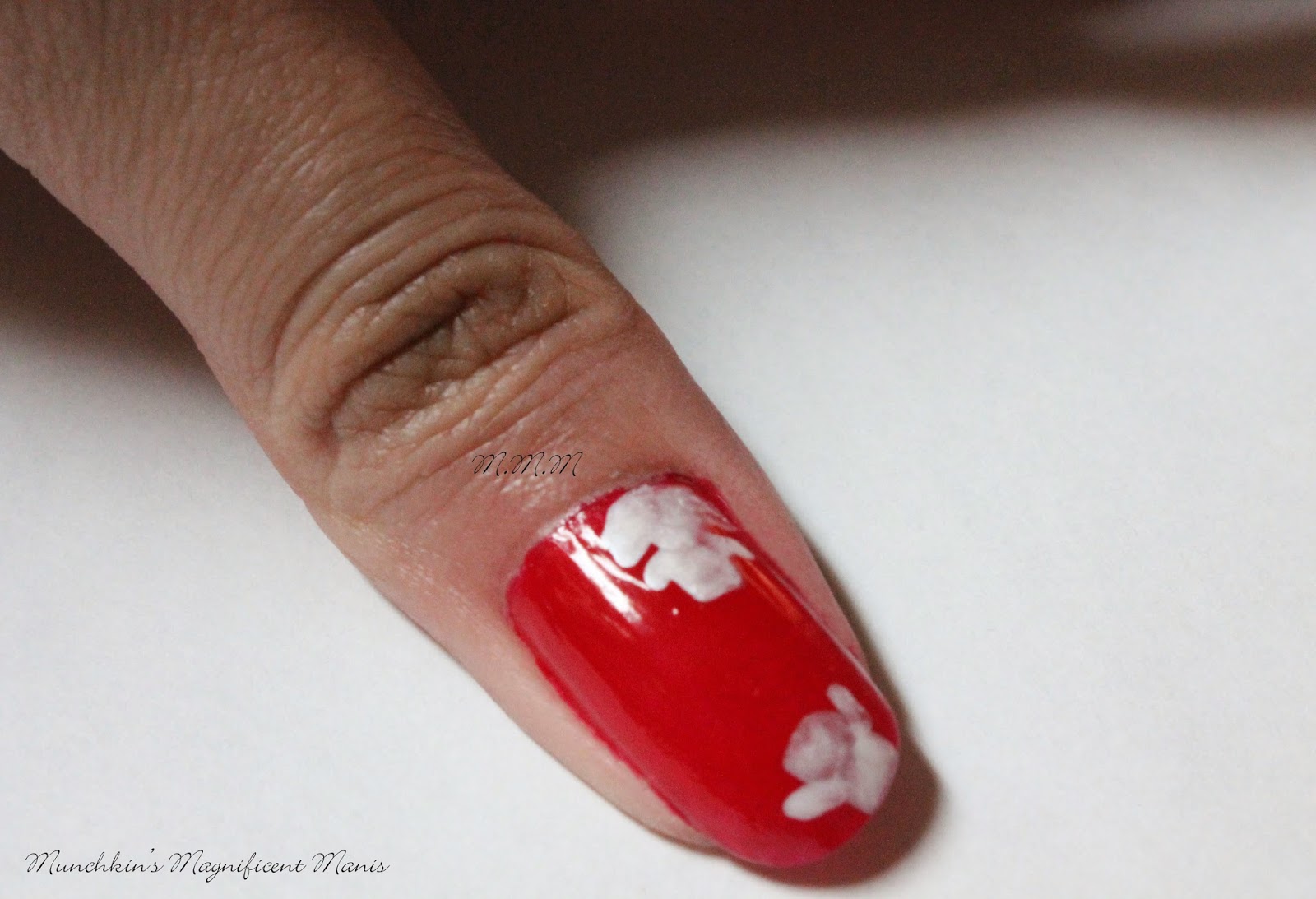 12. Next draw to lines on the side (I know it looks a little weird, but once it is done it will look better, I tried to make the leafs look as much like Lilo's dress as possible.) 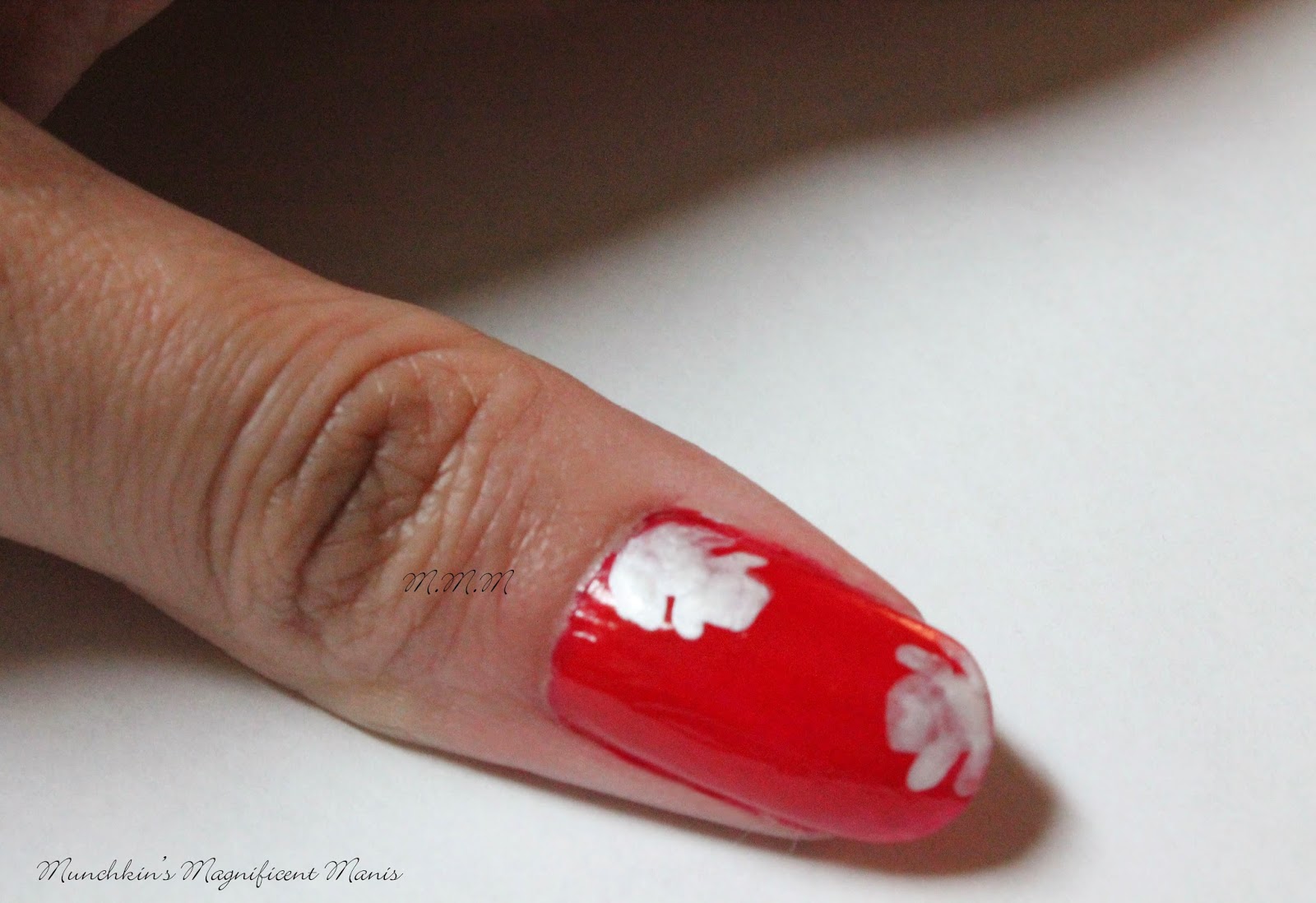 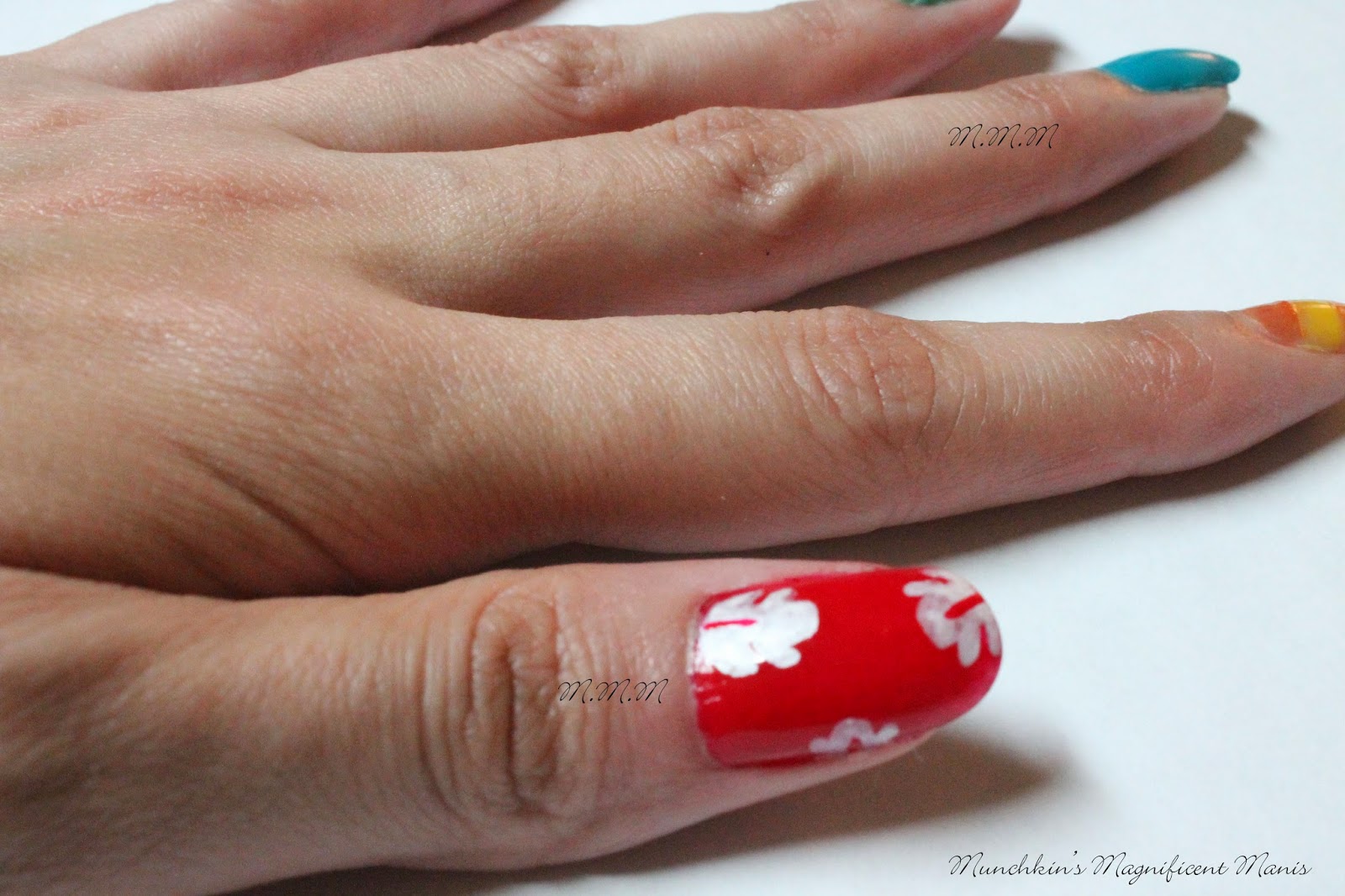 14. The last and final step (wow that was a lot of steps!) With the nail stripper draw a small line with the red polish to complete Lilo's red Hawaiian dress. (I repeated steps 11- 14 three times.) 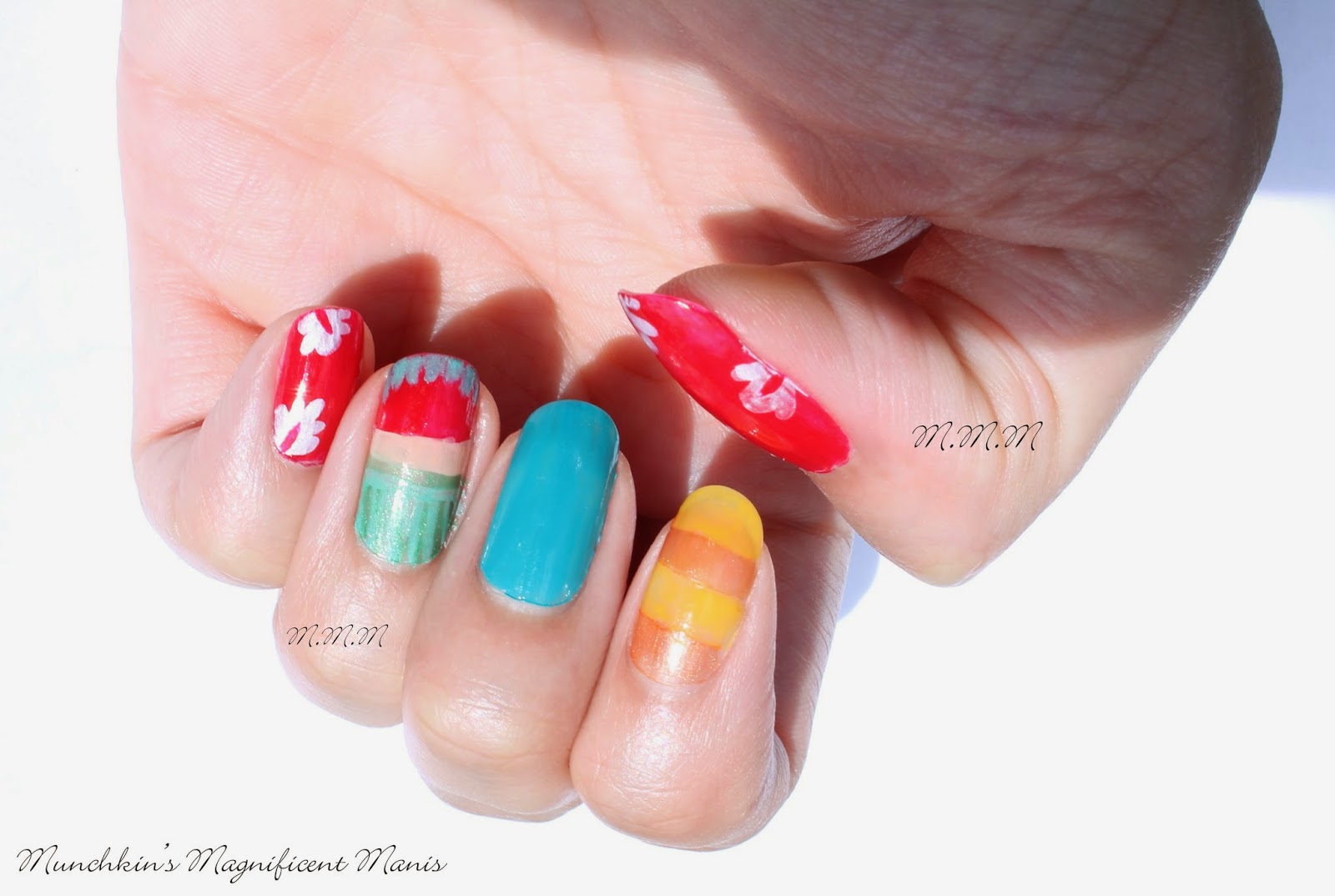 After your design has dried add a top coat . Now you have a fun Lilo inspired nail design with all of her Hawaiian outfits. 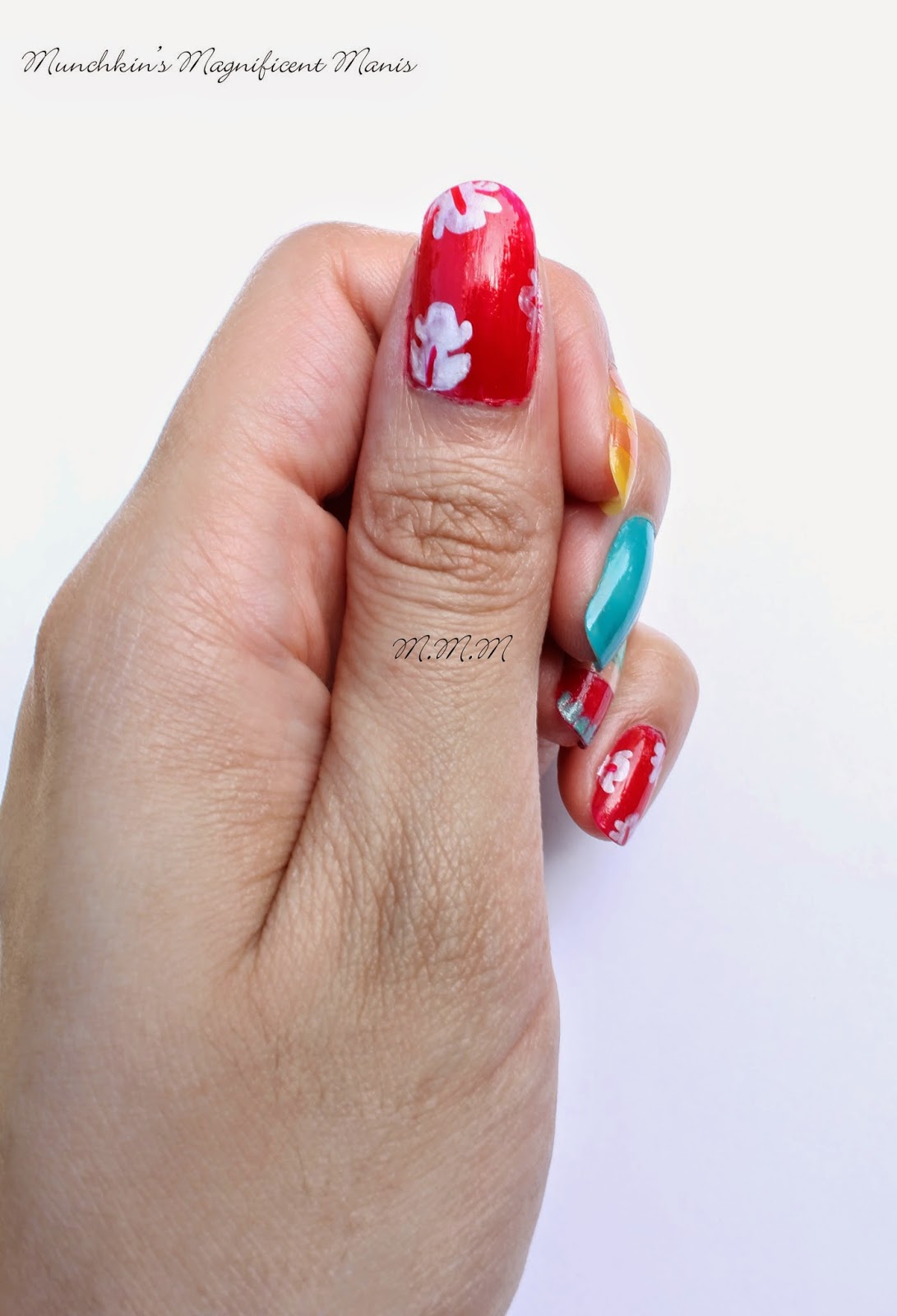 Here is a close up of the thumb nail.

If you would like a different look you can have all of your nails with Lilo's red Hawaiian dress or even add a cute Stitch to your nails for a Lilo and Stitch design. For a simpler look just have the ring finger or accent finger with one of her outfits, and the other nails with just a solid color. 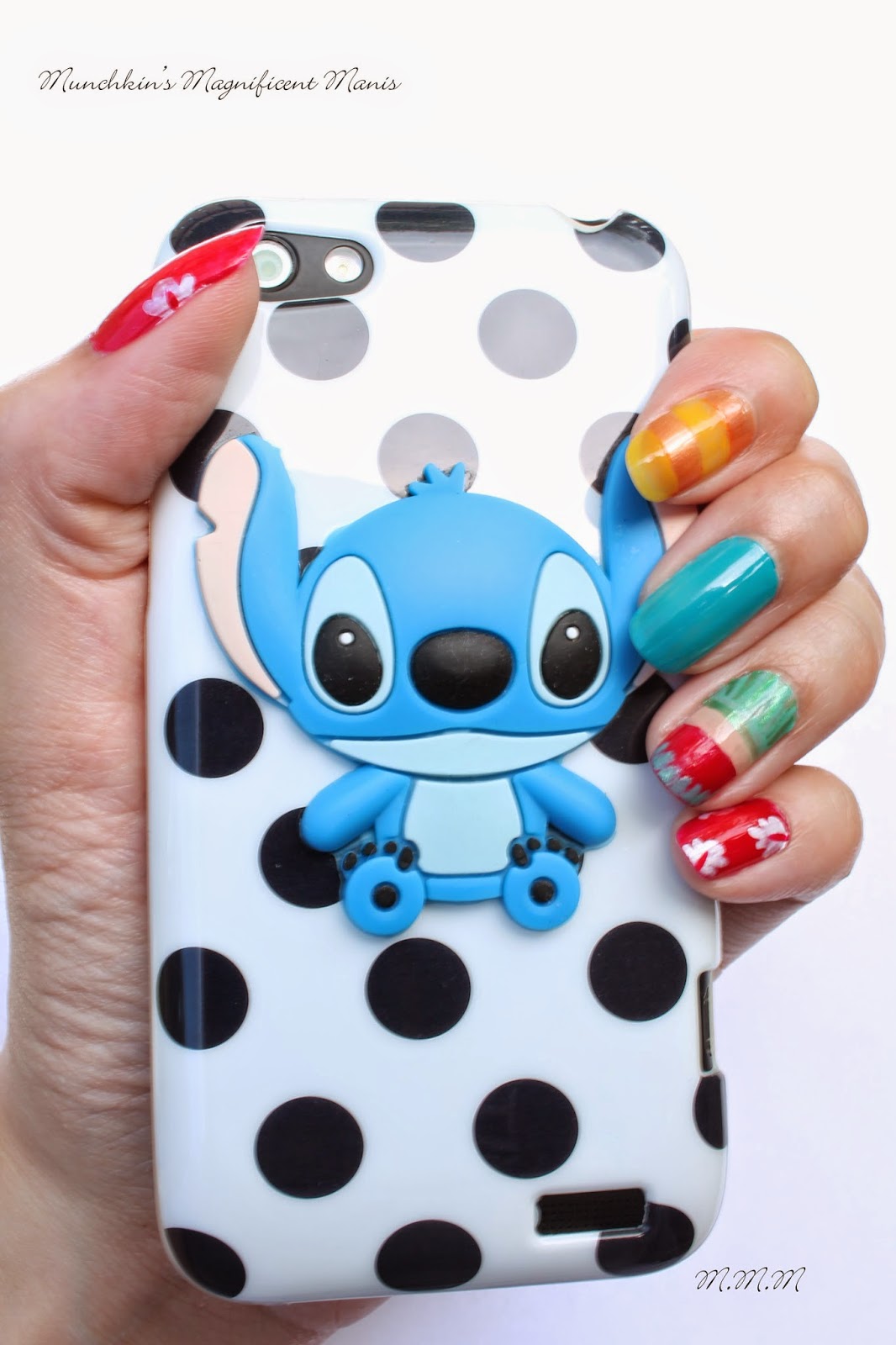 Thought I would add this photo of me holding my cell phone with my cute Stitch case. Thought it would look cute with my Lilo nail design, due to me not adding Stitch into the design.

Hope everyone likes this Lilo inspired nail design. Also, remember Ohana means family, family means nobody gets left behind or forgotten. (Lilo and Stitch quote.)
Aloha and see you next time for my next nail design tutorial!